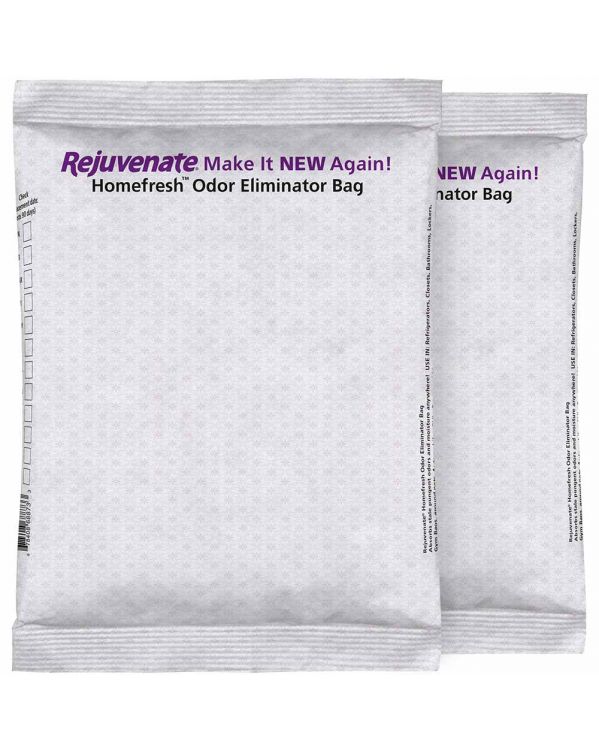 Skip to the beginning of the images gallery

Rejuvenate’s Homefresh Set of 2 Odor & Moisture Refill Packs are perfect for those constantly smelly areas! Place anywhere you need odor eliminated. This includes gym bags, trash cans, litter boxes or dog beds, refrigerators, next to shoes, and many more. This revolutionary technology doesn’t just cover up the odors but instead removes it completely! This non-toxic and natural material absorbs any smells leaving you with clean air.

Eliminates odors, doesn’t just cover them up! – The minerals inside act like sponges on water, eliminating the odors and not masking it with other scents like competitors. So versatile it works as a litter box pet odor eliminator, smoke smell remover in a car, food smell eliminator in a refrigerator, and a musty smell eliminator in a basement.

Homefresh is also good for gym bags, trash cans, shoe racks, trucks, boats and even RVs. The minerals inside are created from natural flowing volcanoes to underground water sources. These porous, negatively charged compounds attract all of those positively charged smells and trapping them inside. Contains two ½ pound odor & moisture packs, along with a beautiful décor holder includes two odor eliminator packs.

Each bag measures 7-1/8"H x 6"L x 2-1/2"D and a holder. Replace your odor fighting refill bag every 90 days for optimal performance. Make it new again! Best in class products. Made in the USA.

Newsletter Signup
Sign up today and receive an instant coupon code!
To Top